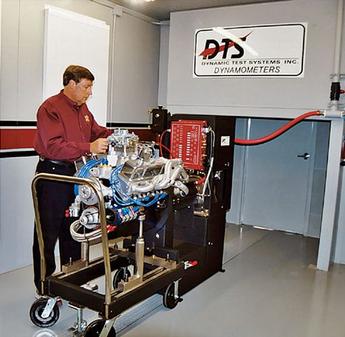 This is a reprint from Super Chevy Magazine . http://www.superchevy.com/how-to/0710ch-how-dynos-work

For a comprehensive explanation of how dynos work, we sought the expertise of Harold Bettes and Dan Roberts, two of the foremost authorities on engine dynos in the country. After a long tenure with Superflow, Bettes branched off to form his own consulting firm, Power Technology Consultants. Through his decades of service in the industry, Bettes has held dozens of seminars educating industry insiders on the same material we'll discuss in this story. Likewise, Roberts is the tech guru at Dynamic Test Systems, maker of some of the finest dyno equipment on the market. Thanks to them both, we've got answers to some of the most controversial topics surrounding dyno testing, from correction factors to test accuracy to test-cell layout, as well as the basics of how dynos work.

Dyno Types
By far, water-brake dynos are the most popular in performance automotive applications. At the heart of the dyno is a power absorption unit, which attaches directly to an engine's crankshaft or flywheel. As an engine is accelerated on the dyno, the absorption unit's rotational element (rotor) spins inside its stationary housing (stator). It functions much like a torque converter but uses water instead of transmission fluid. Consequently, although the rotor and stator are not physically connected, as the rotor starts to spin, the stator tries to rotate with it in the same direction. Attached to the stator housing on one end and the dyno's steel frame on the other, a strain gauge prevents the absorption unit from spinning and measures torque. "What dynos actually measure is torque, not horsepower," explains Roberts. "Since horsepower is a mathematical equation, the dyno measures torque then calculates horsepower."

Eddy-current (EC) dynos operate on a similar principle, but electrical current provides the load in lieu of water. A steel rotating element spins through an electromagnetic field, and load is increased by cranking up the magnetism. The benefit of EC dynos is their precise load control. In steady-state testing, they can control an engine within 1-2 rpm, opposed to the 5-10 range of a water-brake dyno. However, they're not very practical or appropriate for most engine builders. "Although they're very precise, EC dynos are extremely expensive to set up and operate and have less dynamic operating range in terms of measuring horsepower," says Roberts. "That's why they're better suited for R&D labs at the OEs."

The most sophisticated yet least common type of dyno is the alternating-current (AC) dyno. Essentially a large AC motor, in addition to absorbing power it can also power a motor. This allows AC dynos to replicate any on track condition-such as coasting, upshifting, and downshifting-and simulate and entire race in a test cell. Expensive even by Nextel Cup standards, AC dynos are typically reserved for mega-buck racing operations like Formula 1.

Correction Factors
Without correction factors, it would be impossible to accurately compare horsepower numbers from one test facility to another. In theory, correction factors produce numbers that reflect an engine running at sea level, but not all are created equal. There are many SAE correction factors, known in the industry as J codes. "The current is J1349, which corrects to 29.23 inHg at 77 degrees F and 0 percent humidity," explains Bettes. "However, in the automotive aftermarket, it's very common to correct to 29.92 inHg at 60 degrees F and 0 percent humidity. The difference between the two in terms of horsepower calculations is about 4 percent."

Furthermore, to gather pertinent atmospheric conditions, a dyno facility's weather station should be located in the test cell itself. While it shouldn't interfere with an engine's airflow, an ideal scenario would have the weather station hanging down from the ceiling, positioned near the carburetor to most precisely measure the air the engine is ingesting.

Load
Can dynos sufficiently load a motor to simulate the weight of a 3,000-4,000 pound car? You bet. Skeptics think that because dynos don't load a motor as much as under real-world use, engine builders can get away with running more aggressive timing and fuel curves, therefore boosting horsepower figures to unrealistic levels. Not true. "In most cases, a dyno can put more load on a motor than it would normally see in a car," says Roberts. "In a car, load decreases as speed increases due to inertia, but that isn't the case on a dyno." Bettes concurs, pointing out that dynos can load a motor at far lower rpm than a car. "You can load a motor at WOT at 3,000 rpm on a dyno, but a motor would never see those conditions at the track or on the street, since the tires would spin or the torque converter would stall at a higher rpm. Also, a dyno operates at a 1:1 ratio, so unlike a car, it's always in High gear."

Ventilation
Exhaust fumes displace oxygen, so even minute traces of the exhaust that makes its way back into the carburetor dramatically reduces power output and test consistency. According to Bettes, if a shop is located next to a freeway, exhaust fumes from cars during rush-hour traffic will adversely affect dyno readings. In addition to providing fresh air for the motor to breathe, proper ventilation helps shed radiant heat. "To accomplish both objectives, the average test cell needs to flow 20,000-25,000 cfm of air," Bettes explains. "To put that in perspective, people only breathe 3 cfm. A ventilation system doesn't have to be elaborate, but having the right size fan and a good cell design is critical to ensure consistent test results." But wouldn't going overboard have a supercharging effect on the motor? "It's possible, but not likely, since the weather station's barometer would compensate for it in the correction factor anyway. Even if you could manage to supercharge a cell, it would only equal a few inches of water. Considering 13.6 inches of water is equivalent to 1 inch of mercury, that's not much pressure at all."

No two test-cell designs are identical, and multiple arrangements can be used to achieve good ventilation. The fan should draw fresh air from outside the test cell, but some dyno rooms have separate air ducting to feed the carb. Likewise, some cells route exhaust fumes outside of the room while others dump the exhaust right into it. The latter is fine as long as there is sufficient airflow. Ultimately, properly ventilating a test cell isn't a one-size-fits-all affair.

Accuracy
Factors such as load control, test-cell design, and operator technique all influence the accuracy of a dyno. Fortunately, these variables are relatively easy to control, which yields extremely repeatable results from test to test. Since most contemporary dynos are automated, the potential for operator error is substantially reduced and smooth load application isn't difficult to achieve. "Tests should be repeatable within much less than 1 percent, and within 0.5 percent with a good test cell," explains Bettes. "At NASCAR shops, they're looking for 1hp gains out of 850hp motors, and 1 850 = a lot less than 1 percent. Pro Stock shops are often within 1 hp from pull to pull."

Oil & Water Temperature
To minimize variations between pulls, dynos must closely regulate an engine's oil and water temperature. Typically, this is accomplished by tapping into the dyno's main water supply tank. Water from the tank is routed to a cooling tower in the test cell, which supplies water to the motor. The cooling tower has its own thermostat and, in some instances, its own heat exchanger. To circulate the water, DTS recommends a 10hp centrifugal pump capable of flowing 80 gph at 80-90 psi.

Oil temperature can be regulated by simply allowing sufficient warm-up and cool-down time between pulls. Dyno manufacturers can also add a water-cooled heat exchanger to help regulate oil temps. "Generally, the sweet spot for oil temperature is 190-220 degrees F, and it should be held within 2-5 degrees from pull to pull to maintain consistency," Bettes explains. "Running a motor outside that sweet spot can affect power in either direction by 3 percent, and that's a scary number."

Operator Error
These days, the technique of the dyno operator has very little influence on test results. That's because the vast majority of dynos are automated. "Even if someone has never seen a dyno before, I can teach them how to run one in 10 mintues," says Bettes. "On an automated system, as the operator adds throttle, the computer automatically adds load to the motor. All the operator has to do is set the rpm range of the test and smoothly apply the throttle. The fans can be set up to turn on and off automatically as well." Conversely, manual dynos are more difficult to use, since the operator must control throttle with one hand and manually add load with the other hand. Although an operator can impact test results far more with a manual system than an automated system, they're rare these days.

Warm-Up & Cool-Down
Although different engines have different needs, all dyno tests should allow for sufficient warm-up time before each pull and cool-down time between pulls. To ensure consistency between tests, fluid temperatures must be stabilized. "Opinions vary greatly, but for a street/strip motor, the oil temperature should be at least 190 degrees before going WOT, and coolant temperatures should be held between 160 and 165 degrees+ F," Bettes explains. "Target fluid temperatures with race motors are all over the map because the temperatures a motor will see on the track is what should be duplicated on the dyno."

Power & Fuel Supply
Different manufacturers implement different setups, but a dyno's electrical equipment usually draws power from the building, while the motor's ignition system and starter run off a battery positioned in the dyno cradle. When it comes to fuel supply, every cell is different, but a dyno's fuel system closely resembles that of a car. Typically, a fuel cell is mounted remotely outside the dyno room with feed and return lines running to the motor. "We can supply a fuel system, but most facilities choose to put it together themselves to suit their own needs," says Roberts. "They can vary quite a bit from shop to shop, but should be designed to duplicate how it will be run in the car as closely as possible. If a dyno flows more fuel than the car that motor will go in, the motor will make more power on the dyno than on the street."Ultimate Tuning Tool
Inevitably, some people will use dynos strictly as bench-racing tools. For serious racers, however, dynos are the ultimate tuning tool. "Let's say you have a sprint-car engine that comes off of the corners at 6,500 rpm," says Roberts. "Using the dyno, you can then narrow in on the rpm range to maximize torque from 6,500 to 7,000." In other words, by replicating track conditions without actually going to the track, racers can make much better use of what little track time they have. "In NASCAR and F1, teams live and die by engine development on the dyno," Bettes opines. "Since track time is so precious, they don't have time to mess around with tuning a motor at the track. They have to be ready to race out of the box."