How it is built

Art Carr loves the GM 700-R4 overdrive automatic as much as the next guy. The problem is, the stock stuff tends to blow up when subjected to real power. That's why he's a huge supporter of the 200-4R overdrive automatic. Blessed by GM's Hydramatic Division with superior guts, it only takes a few well-chosen tweaks to make a 200-4R live behind as much as 1,000 hp. Got a 6-71 supercharged 468 Rat motor in your daily driver-like Robbie Whitlock's '66 Chevelle? Carr can build you a 200-4R that'll take the gaff. We stopped by Carr's California Performance Transmission and came away impressed by the 200-4R's clear advantage over competing four-speed automatics. First off, the 200-4R is an analog transmission. That means, unlike the 4L80E and its lesser "E" siblings, it isn't dependant on a computer to tell it what to do. This fact alone means the cost of a rebuildable core is much lower, a savings that quickly trickles down to your wallet.

While it is true that the 700-R4 is also analog and rebuildable cores are priced as low as the TH200-4R, it has a fatal flaw in the form of a weak input shaft and drum assembly. Its lightweight aluminum construction limits capacity to around 500 hp, less if the car is heavy.

The hassle is the drum is a very complex part and so far nobody has invested in the tooling required to manufacture a superior aftermarket replacement. On the other hand, the 200-4R is free of this inherent deal breakers. Oh sure, it's ripe for improvement, and this story outlines just a few of the steps Carr takes to bring one up to snuff. We'll show you that in a minute. But the 200-4R has other inherent advantages over the 700-R4. Let's make a list:

*At 27 3/4 inches, it's the same length as a Powerglide or short-tail TH350, so swappers can reuse the driveshaft without modifications. By contrast, the 700-R4 measures 30 3/4 inches and generally requires a custom-length driveshaft.

*If you swap it for a 28 1/4-inch short-tail TH400, just change yokes and the original driveshaft fits.

It shares the same 26 3/4 face-to-mount distance as the short-tail TH400, so it'll bolt right up to the TH400 transmission crossmember.

*GM designed the 700-R4 valvebody to prevent overdrive access at full-throttle to ensure survival. Not a good sign. The 200-4R is free of such nonsense and is ready for big-block overdrive blasting with only minor beefing.

*The TH200-4R case has a dual-bolt pattern that fits Chevy, as well as all BOP V-8 blocks. The 700-R4 case requires an adapter behind non-Chevy blocks. 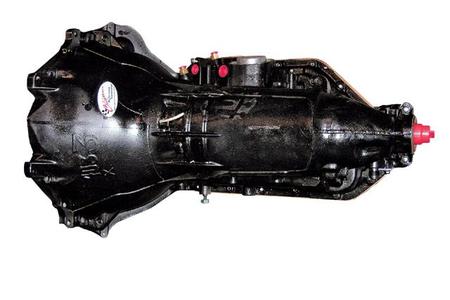