Low Risers
So, if the new race head was a “high riser,” everything else needed a name too, and thus they became “low risers.” While this best describes the earlier 390, 406, or 427 performance heads, the low riser designation has become a default term used to describe every non-performance factory casting as well. As a result, there is a dizzying array of head castings that fall into the low riser category. Fortunately for the guy building on a budget, most of these castings will physically bolt on and work on all popular FE engines. The 427-based heads that would cause any valve interference issues are readily identified collector items; a casual builder is unlikely to stumble upon a set.

The C3AE-D head’s intake port and chamber is a classic low-riser design. The port opening is actually larger than the later medium riser design, but not as tall as the exotic high-riser. The low-riser designation is based on the basic size and floor position of the port. Most non-performance FE heads have come to be considered “low risers” by default.

Some builders consider the C6AE-R head to be the best of the standard heads, and this particular one was the last passenger-car head to use a full-size variation of the low-riser intake port. Most subsequent non-performance FE heads from 1966-on had a smaller port opening. Realistically, these are good parts, but nothing particularly special. You can find a number of aftermarket heads that perform better than these, even after modest porting work.

Like other FE heads, the C6AE-R head has an exhaust side with a normal 8-bolt pattern. Heads from 1966-on, including the later truck heads, have the exhaust port in a lowered location while the bolts remained in the same spot. This can make it difficult for some headers to fit because they overlap the port opening causing header leaks and reduced power. Since header manufacturers do not specify which head was used to master their mounting flange, the only way to determine whether any particular headers will fit is to mark and test fit them first.

A C6AE-U GT390 head has an exhaust side with a unique 14-bolt pattern, and therefore it’s a special part to fit a few applications. In fact, the heads were originally designed to ease fitment of the exhaust side of the manifold in the Mustang and Fairlane platform. The 14-bolt exhaust pattern only fits the stock manifolds properly and even headers supposedly designed for these cars don’t fit the exhaust pattern well.

Most factory low-riser heads are functionally interchangeable, sharing a common port entry, rocker pedestal position, and chambers that are reasonably similar in volume. Some castings are more desirable than others, but the differences and advantages are generally modest. Exhaust port position can cause some issues with header compatibility. The volume header manufacturers did not recognize that, although the bolt pattern remained the same, there are two different port heights relative to the deck.

Medium Risers
The medium-riser combination actually followed after the others, and was in part an effort to get a raceoriented 427 into a production vehicle without the hood bubble. The medium-riser heads share the standard head’s valve-cover rail and reasonably similar rocker-stand heights. Medium-riser intake ports have a raised floor and a more squared-off port cross section, compared to other FE heads. This was said to result from experience and research showing that most airflow occurred at the top and sides of a port, rather than along the bottom, and that the reduced port cross section for a given amount of airflow made the head more efficient. While seemingly intuitive in today’s context, the move to a physically smaller port cross section was quietly revolutionary considering that every other performance engine, including those from Ford, would still be going down the “bigger is better” path for several years.

A C5AE-F head shows the medium riser intake port and the machined wedge combustion chamber. The medium riser was released in 1965 and had a design permitting it to fit under a conventional hood. The valve cover rail and rocker mounting were also more conventional than the highriser predecessor. Medium-riser heads have a very efficient port size and shape for the era. As such, they served as the design inspiration for the Edelbrock heads. The port is smaller than the traditional low-riser head and yet flows more air.

The C0AE-D has the large low-riser size intake port opening and a small volume chamber measuring roughly 60 cc. It is important to note that the actual chamber volumes of FE heads can vary dramatically from the published data, especially on “as-cast” chamber heads. Machined chambers are normally more consistent, but these being 50 years old they’ve likely been machined a time or two.

High Risers
As factory involvement in racing took hold in the early 1960s, it developed a specialized racing cylinder head that was used first in limited production lightweight Galaxies and later in the Fairlane Thunderbolt. This race-oriented head had numerous unique characteristics, including a different valve-cover mounting-rail angle and rocker stand heights. But the intake port was the key feature. It was dramatically taller than those on the traditional FE head. This mandated a matching tall intake, which in turn required a lump in the hood–the instantly recognizable teardrop bubble–and the term “high riser” was coined.

The C4AE high-riser exhaust port heads were fitted to the 427, so these are rare heads indeed. This raceoriented head had numerous features that set it apart from the stock 390 heads, such as different rocker-stand height, and valve-cover angle. The intake port was the key feature and it was far taller than those on the traditional FE head.

High-riser rocker mounting is shown in detail, and once again, notice that the pedestal-mounting height, which is unique to the high-riser.

You can easily see the difference in valve-cover rail angle and rocker pedestal-mounting height between the medium-riser head (left) and the high-riser head (right).

High-riser heads have considerably larger valves than traditional passenger car heads, along with a wider distance between the valve centerlines. Also, a much larger combustion chamber—at around 86 to 88 cc—required a domed piston to achieve high compression. The rocker system for the higher riser at first glance looks like any other FE, but it actually uses a shorter pedestal height in order to accommodate the casting’s raised intake port.

High-riser heads were always rare, only came in limited-production specialty vehicles for a couple of years, and have become extremely valuable. You will not find them in a salvage yard or at a garage sale. They were always race parts and most of them led a hard life with extensive modification and repair being common. It is safe to assume that all remaining usable castings are in the hands of either collectors or racers.

If you are looking for FE heads I can do a search for you. The preferred casting numbers are sold for ridicules pricing due to being very rear now.

When it comes to 427 heads, we have three basics types, not including the SOHC and Tunnel Port. From left to right are the Low Riser, Medium Riser and High Riser.

The Low Riser is a fine street head and isn't much different than the 390/406 High Performance casting.

The Medium Riser head gives a better balance of street and strip performance. It is a compromise between the
High and Low Riser pieces.

The High Riser head (on the right) has huge ports for high-rpm operation. Its small chambers yield much higher
compression ratios. These heads do not interchange well with other "FE" displacements due to valve to block interference. The 427 had the largest bores and valves of the "FE" series engines 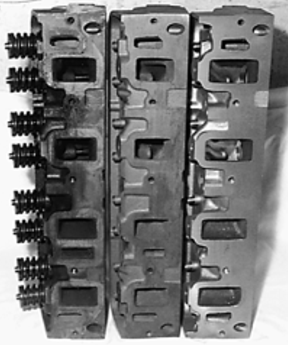 Flow numbers are as follows:

Valves sizes used in testing above numbers are 2.250″ intake and 1.710″ exhaust. No pipe on the exhaust.

Ports showed no backup in testing to 1.00″ lift. 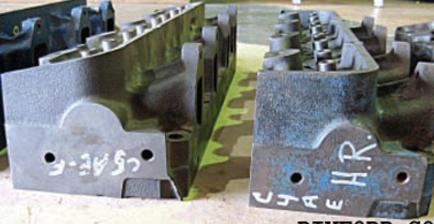 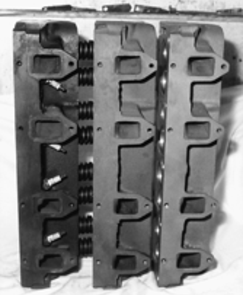 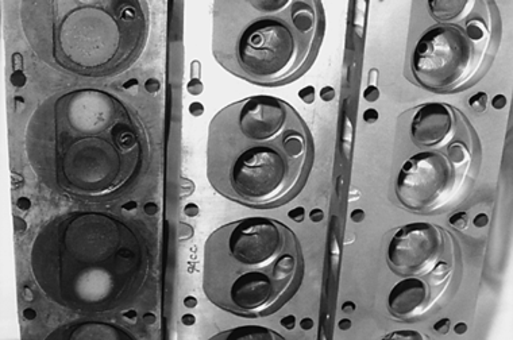 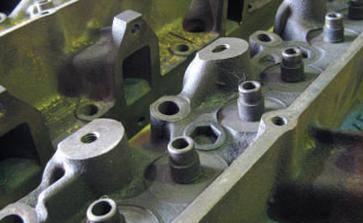 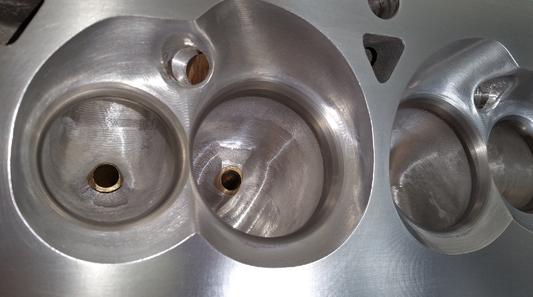